D-Day was a pivotal moment in the Second World War, when thousands of British, American and Canadian soldiers stormed the beaches of Normandy to gain a foothold in Nazi-controlled Europe on June 6, 1944.

The D-Day invasion of Normandy took a tremendous amount of co-ordination to pull off from the Allied stronghold of Britain, which was one of the few European territories not under Adolf Hitler‘s control. Germany had effectively conquered the mainland in 1940, and the Allies needed to take some of it back in order to defeat the Nazis.


READ MORE:
How the Allies broke through Hitler’s ‘Fortress Europe’

Nearly 133,000 Allied troops crossed the English Channel in a fleet of more than 5,000 amphibious ships, with 1,213 warships defending them at sea. The Allies also dispatched approximately 4,000 bombers and 3,700 fighter-bombers to hammer the enemy’s coastal defences.

WATCH: Here’s what the ‘D’ in D-Day stands for

The cross-Channel invasion was called Operation Neptune, while the overarching plan to invade mainland Europe was dubbed Operation Overlord.

Here’s how the battle played out, hour by hour. All times are local.

The Allies originally plan to invade Normandy on June 5. However, U.S. Gen. Dwight Eisenhower, the Allied supreme commander, decides to postpone the invasion by 24 hours due to poor weather conditions. Eisenhower worries the weather will be a problem for the Allied landing ships when they cross the English Channel.

WATCH: How Canadians shaped the greatest invasion in history

The Allies have a massive force of troops, planes and ships gathered in Britain, but they conceal their invasion plans by deploying dummy armies throughout the U.K. to threaten other German targets across the water. They set up fake tanks and stage fake radio chatter at several points, including Dover, which is across the water from German-held Pas-de-Calais. The ruse convinces the Germans that Calais is the Allies’ true target.

Approximately 7,000 ships leave Britain under cover of darkness. The ships are loaded with Allied troops primarily from Britain, the United States and Canada.

The soldiers are split up to invade five landing points along the coast of northern France, each with its own code name. The U.S. Army is assigned to Utah and Omaha beaches, the British are tasked with taking Gold and Sword beaches and the Canadians draw Juno Beach. 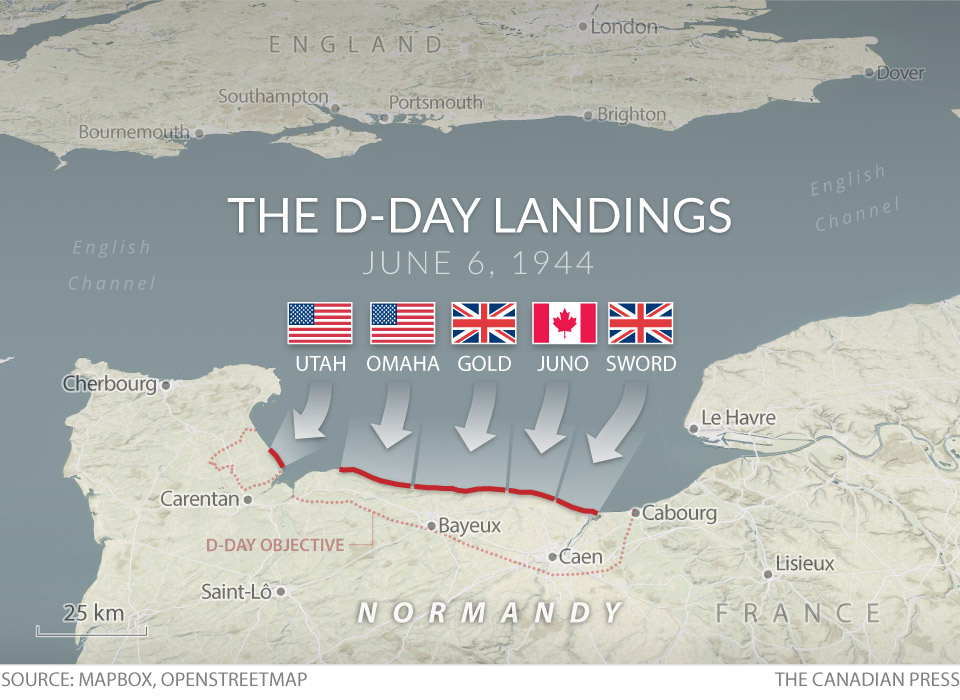 That night, Eisenhower pens a morbid note announcing the invasion is a failure, just in case he needs it.

“If any blame or fault attaches to the attempt, it is mine alone,” he writes, underlining the last two words. He mistakenly dates the note “July 5” and tucks it away in a drawer, hoping never to use it.

Several paratrooper groups land on the beaches and begin chipping away at the heavily fortified coastal defences. Many others are scattered across the countryside, making them slow to get into position.

The German navy detects Allied ships off Pas-de-Calais. The ships are part of the feint to distract from the Allies’ true target in Normandy.

Allied warships drop anchor off the coast of Normandy to wait for dawn and provide cover for the landing ships.

Allied warships are shown at Bernieres-sur-Mer, France on June 6, 1944.

The Allies continue to drop paratroopers into France, with more than 13,000 deployed by morning. An additional 4,000 troops fly in on gliders. Approximately 450 members of the 1st Canadian Parachute Battalion are among the paratrooper force.

Some of the paratroopers die in crash-landings or drown in flooded fields.

The Germans notice the paratrooper invasion and begin to scramble a response, although they don’t yet fully grasp the scope of the invasion.

German and Allied ships clash in the first skirmishes at sea.

Forward 14/45 guns of the U.S. navy battleship USS Nevada fire on positions ashore during the D-Day landings on Utah Beach in Normandy, France on June 6, 1944.

The sun rises, and the landing operation is fully underway. The Allied battleships stop firing as their landing boats approach the shore at 6:30 a.m., dubbed “H-Hour” for the designated moment of the invasion.

German forces pepper the landing boats with gunfire, killing scores of Allied troops before they can reach the beach.

In this June 8, 1944, file photo, under heavy German machine-gun fire, American infantrymen wade ashore off the ramp of a Coast Guard landing craft during the invasion of the French coast of Normandy in World War II.

The landing ships are tightly packed together, and they suffer heavy casualties under the German assault. Nevertheless, the Allies manage to land their troops, and the fight for the beaches begins.

The Allies deploy amphibious tanks on the beaches of Normandy to support the ground troops and sweep for defensive mines.

American troops face heavy machine-gun fire on Omaha Beach, the most heavily fortified landing point of the invasion. Approximately 2,500 U.S. soldiers are killed on the beach in the bloodiest fight of the day.

Eisenhower announces the invasion has begun in a communique to soldiers.

“You are about to embark upon the Great Crusade, toward which we have striven these many months,” Eisenhower writes. “The eyes of the world are upon you. The hopes and prayers of liberty-loving people everywhere march with you.”

In this June 6, 1944, file photo, U.S. Gen. Dwight D. Eisenhower, left, gives the order of the day to paratroopers in England prior to boarding their planes to participate in the first assault of the Normandy invasion.

The Allied forces send a separate communique announcing the invasion to the media.

“Under the command of General Eisenhower, Allied naval forces, supported by strong air forces, began landing Allied armies this morning on the northern coast of France,” the brief communique says.

American troops turn the tide of battle at the Omaha landing point, with warships backing them up at sea.

This photo shows the scene along a section of Omaha Beach in June 1944 during Operation Overlord.

“So far, the commanders who are engaged report that everything is proceeding according to plan. And what a plan!” Churchill says. “This vast operation is undoubtedly the most complicated and difficult that has ever taken place.”

After sleeping through the morning, Adolf Hitler wakes up and learns of the attack. He remains convinced the landings are a decoy and that the real invasion will come at Calais. He refuses to reassign his army to defend Normandy.

Canada’s force of 14,000 troops takes Juno Beach and presses inland. British and American forces, including those at Omaha, take control of their beaches as well.

Canadian soldiers land on a Normandy, France beach during the D-Day invasion on June 6, 1944.

THE CANADIAN PRESS/Department of National Defence

The Allies bring in tanks, tend to the wounded and clear away mines on the beaches. They also start pressuring German forces at Caen, a key city in the area.

Hitler finally agrees to send reinforcements to Normandy rather than waiting for an assault at Calais.

Allied reinforcements from Britain arrive in Normandy. Ground troops link up with the paratroopers further inland and press on toward Caen. However, the city does not fall until July 10.

At least 4,000 Allied soldiers are killed in the initial attack, including 359 Canadians. However, the invasion ultimately prevails, and the German forces are either killed, captured or forced to withdraw to Caen.

The Allies have won the day and taken their first step toward liberating Europe. They continue to ferry troops and equipment across the Channel, and by the end of June, the Allies have more than 850,000 men, 148,000 vehicles and 570,000 tonnes of supplies in France. These forces allow them to march across western Europe, freeing Allied nations and driving the Germans back to Berlin, while the Soviets do the same from the east.

Hitler dies by suicide during the siege of Berlin on April 30, 1945. The Germans surrender a week later on May 8.

—With files from Reuters, the Associated Press, Veterans Affairs Canada and the U.S. Army

D-Day by the hour: A timeline of Operation Overlord in Normandy

US moves to block release of Iranian tanker – reports, Reports